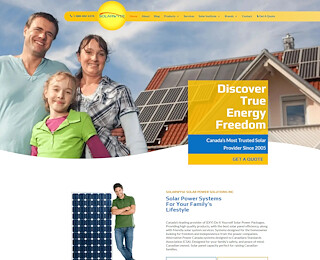 Canada is considered one of the sunniest places on Earth. The sun is a natural resource that can provide renewable energy, unlike fossil fuels. As a free and non-polluting source of energy, it makes sense that people should increasingly utilize solar power.

What is a solar battery?

Solar batteries in Canada and the rest of the world are deep-cycle batteries that store the energy collected with solar panels for later use. This energy storage system can also be used for other renewable forms of energy, such as wind energy.

Solar batteries come in several different types. There are lead acid batteries, which are a time-tested technology that has been around for many years. They also tend to be the least expensive options, although they also have a shorter life compared to other solar batteries.

Lithium ion batteries are another form of solar batteries. These have a longer lifespan than lead acid batteries, but they tend to be more expensive. They are often more convenient because they are lighter and more compact, taking up less space.

Other form of solar batteries is the saltwater battery. They don't utilize heavy metals and instead rely on saltwater electrolytes. Unfortunately, there hasn't been a lot of research or development in these batteries, but they may become a more common option in the future.

You'll find that there are several specifications that you should consider when you're looking at solar batteries. One is the capacity of the battery, which is the amount of electricity that the battery can store. Many are stackable, so you can get more capacity by having multiple batteries.

The power rating of the battery lets you know how much electricity a given battery can provide at any time, measured in kilowatts (kW). A low capacity and high power rating mean you can run most or all of your home appliances and energy needs but only for a short time.

The depth of discharge is another important specification of the batter. It is the amount of a battery's capacity that has been used, and you don't want to exceed that or you will shorten the battery's life expectancy and usefulness.

Solar batteries should also have the round-trip efficiency evaluated. This component is how much energy can be used compared to how much energy was needed to store that energy. A higher efficiency means you are getting more of an economic value out of the battery.

You should also consider the battery's manufacturer, as some are going to be of a higher quality than others. The warranty is also important to keep in mind. This feature will generally tell you the number of cycles, where the battery charges and drains, or how many years the battery is expected to last.

If you are looking for solar batteries in Canada, contact us at Solarwyse. We offer a variety of solar power packages that make solar power a reliable and affordable source of energy for any Canadian family.

This is a notification that can be used for cookie consent or other important news. It also got a modal window now! Click "learn more" to see it!

We may request cookies to be set on your device. We use cookies to let us know when you visit our websites, how you interact with us, to enrich your user experience, and to customize your relationship with our website.

Click on the different category headings to find out more. You can also change some of your preferences. Note that blocking some types of cookies may impact your experience on our websites and the services we are able to offer.

These cookies are strictly necessary to provide you with services available through our website and to use some of its features.

Because these cookies are strictly necessary to deliver the website, you cannot refuse them without impacting how our site functions. You can block or delete them by changing your browser settings and force blocking all cookies on this website.

These cookies collect information that is used either in aggregate form to help us understand how our website is being used or how effective our marketing campaigns are, or to help us customize our website and application for you in order to enhance your experience.

If you do not want that we track your visist to our site you can disable tracking in your browser here:

We also use different external services like Google Webfonts, Google Maps and external Video providers. Since these providers may collect personal data like your IP address we allow you to block them here. Please be aware that this might heavily reduce the functionality and appearance of our site. Changes will take effect once you reload the page.